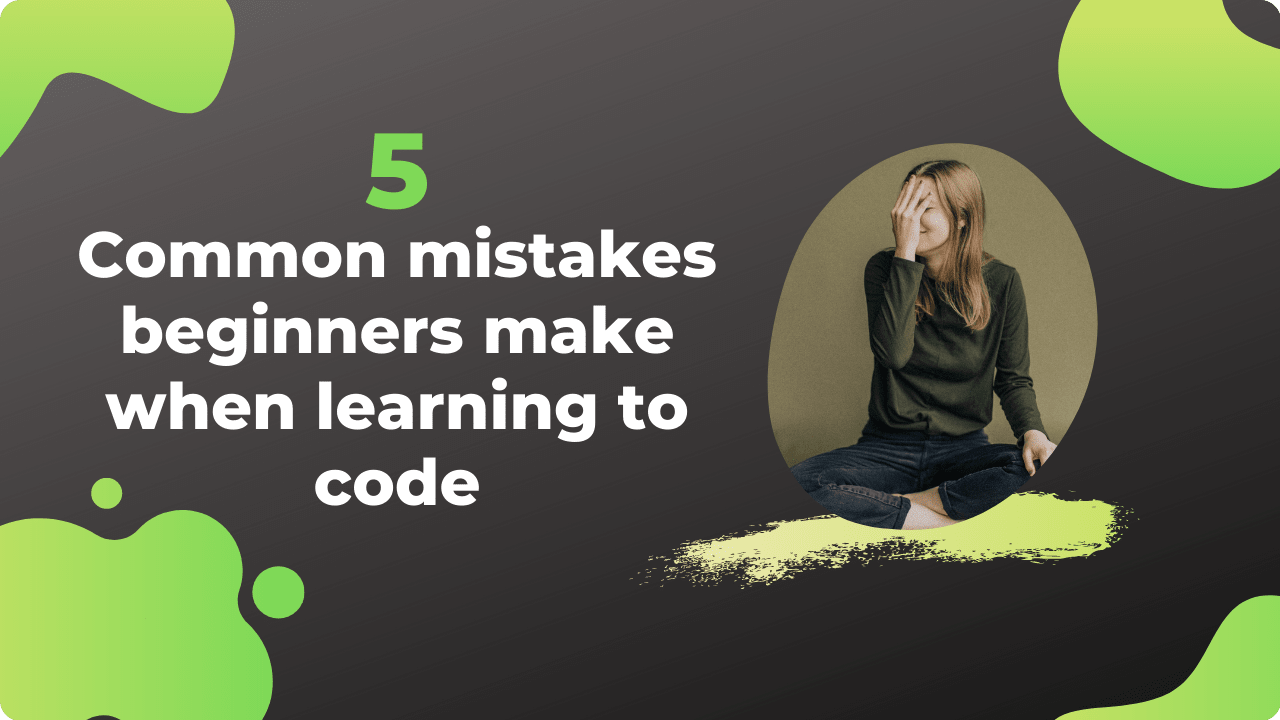 Summary: ↬ In this article, we check on some of the most common mistakes beginners make when starting to learn how to write code.

We're leaving in a time in which almost every other job requires us to have some kind of contact with a computer. Through many years we have been hearing how important is to learn how to code. We can even see how many famous people developed this skill even if it's not required from them.

I believe we're at a turning point in our development as a civilization. A point in which technology has taken over our lives. That's one of the reasons is very common you hear of more and more people either picking some kind of computer-related career or changing career path and become a self-taught developer.

Now, if you're one of those brave souls to decided to go with the self-taught path and you feel that learning to code is too hard, let me tell you, you are not alone in that thinking. Coding is hard, no matter which route you choose in order to learn. On top of that, we tend to make many mistakes during the process. And before we know it, we decide to turn around and away from this.

Coding is not for everybody, that's a fact. However, if you really want to learn, is just a matter of focus and work on it. With that in mind, I decided to write this article to highlight some of the most common mistakes that beginners make when starting to learn. This way, if you're starting or considering to start learning, you can avoid them. Without further to say, let's start.

1. Not sticking to one programming language

This is a very common mistake that many new developers make (I include myself in this group). The reason is so common, comes from a lack of knowledge standpoint. Because we're just starting, we often tend to believe we need to learn every programming language and every tool out there...WRONG!

Instead, we should just pick one language and stick with it at least while we're starting. This will allow us to focus on just one technology and learn all the basics required to be a software developer. In other words, by learning how to code with one programming language we're able to focus on learning all the fundamentals of software development using one language and not worry about learning different syntaxes and rules from other languages.

Once we have built a solid foundation it will be really easy to jump from one language to another.

Another common mistake is to skip the basics of programming and go directly to things that require us to have a good foundation. A typical example would be to go and learn React.js without having a good JavaScript foundation.

Focus on learning the basics and building a good foundation (it doesn't matter in which technology). If you have a good foundation in one programming language, and really know stuff like variables, control flow, classes, functions, asynchronous code, and so on. Then, it doesn't matter which technology they throw at you, whether is a framework, library, or even another language you will get the hang of it in no time.

Back to the JavaScript example. If you have a good JavaScript foundation it won't matter if you try to React, Angular, Vue or Svelte, Node, or any other JavaScript framework. It will be way easier to understand it. And this applies to any language.

3. Giving up to fast

Learning software development is not easy. If it was, everyone would do it.

That been said. Is important to know that this process takes time. How much you ask? Well, that depends mostly on you. We all learn at a different pace. But, don't expect to become a solid developer in 1 or 2 months. Although you can learn a lot in a few couple of months, it takes years of practice and continuous learning to become a really good developer.

So, my advice is: Be patient. Take it one step at a time and enjoy the journey.

4. Trying to do it alone

There is a huge developer community, and there are many platforms and ways to learn to program. Don't do it alone!

By trying to learn alone, you private yourself of the advice of people with more experience than you. If you're self-taught my advice would be to get involved in different communities, you have platforms like Youtube, Discord, StackOverflow, and many others where people share their knowledge and experiences. Also, you may know people in your area with which you can talk about software development topics.

When you have doubts, ask questions, do your research. There are plenty of sources and people out there that can help you and guide you on the right path.

In case you don't know what the tutorial hell is, I wrote about it a few weeks back, you can read it here.

You need to avoid falling into the tutorial hell and start working on your own projects as soon as possible. Is only when you start writing code on your own when you really start learning. Any course or book or tutorial will only show you the basics. The rest is on you.

Finally...take your time and enjoy it!

Learning to code is not easy, especially if you're on the self-taught path. Still, you need to know you're not alone!

See it this way, you're not the first one to try to learn how to code (and certainly won't be the last). Don't be afraid of the possibility of failure, instead, focus on how much you can grow if you put on the work and learn. Focus on your goals and the motives on why you want to learn and let them be your guide.

Also, do your research. Programming is a really broad term. There are plenty of areas in which you can work (you don't have to learn everything). Find out what you like, what area interests you. Do you like web development? or maybe mobile development is what you like? what about software development?. Who knows, maybe what will get your attention is machine learning and there is a chance you still don't even know what that is.

There are plenty of areas to work in, I just mentioned a few of the most popular. If you're not sure what you like, then test them out. Try them for a few days or maybe weeks (without going too in-depth), ask around. Once you have found what area you liked the most then look up which are the most used languages and technologies for that area and just focus on that.

And the most important thing...HAVE FUN!

Table of Contents 1. Not sticking to one programming language 2. Skipping the basics 3. Giving up to fast 4. Trying to do it alone 5. Tutorial hell captive Finally...take your time and enjoy it!